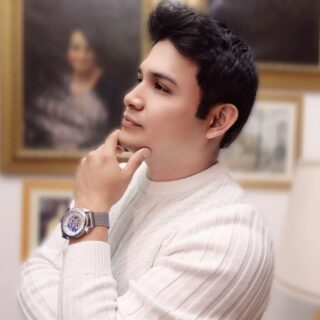 What began as a love of music since I was a child, today has become a project that has become a reality that every day conquers more followers in Ecuador and other Latin American countries for its freshness, authenticity and musical quality. After years of effort, Luis Lázaro Parra is a combination of talent and dedication, since his musical career began at the age of 14, his talent and his charming voice make more than one want to listen to him for hours, but how did Luis’s career begin? Luis? Luis Lázaro always liked music, so he made the decision to upload some original songs to his YouTube channel and Facebook, and after they went viral, he began his professional career. When he achieved success with his videos, he decided to create his first acoustic called “Llegaste Tu”, a fact that allowed him to break into the independent scene, and organize tours in the interior of the republic and in the cities of Milagro and Naranjito, the city from where is original. Although his career as a professional singer took off, Luis decided to start studying composition at the Society of Authors and Composers of Milagro, while studying he also began his career as a composer, he began working independently with some Ecuadorian companies and artists. In addition, Luis released a series of singles and collaborations, which allowed him to sing on tours in different parts of Ecuador. After all his effort, the Ecuadorian composer is producing an album that will be released at the end of November, Luis’ philosophy about music The Artist shared that for him music and his songs are the greatest source of healing and encounter with consciousness through emotions that exists. His constant musical search has led him sentimentally in each song he composes, which creates a direct bridge to the heart, this allows him to create a safe space with his fans. “I want my songs to be a hug from God for everyone who needs it.” He shared in our interview.